Recently a new paper entitled ‘Spontaneous and stimulated electron-photon interactions in nanoscale plasmonic near fields’ was published in Light: Science & Applications by the researchers from AMOLF, the University of Göttingen, ICFO, ICREA, and the University of Rovira I Virgili. We talked with one of the authors of the paper, Matthias Liebtrau, to learn more about his work, the future of his research and the future of the cathodoluminescence technique. 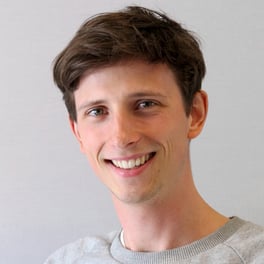 Matthias Liebtrau is a PhD student in the group of Albert Polman at AMOLF in Amsterdam, the Netherlands. Having obtained his Master’s degree in Physics from the University of Bonn, Germany, where he first learned about the world of nanophotonics, he has developed a deep passion for this research field. At AMOLF, he is working on coherent interactions between dielectric and plasmonic nanostrucutures, light, and free electrons in the scanning electron microscope (SEM). Together with other researchers, he is exploring spontaneous emission of light excited by the electrons themselves and their manipulation via stimulated interactions with optical fields that are driven by an external laser source.

The major outcome of the paper was to gain a deeper understanding of how matter mediates the spontaneous (electron-driven) and stimulated (laser-driven) interaction between electrons and light. To this end, Matthias and other authors have compared spatially-resolved measurements with three different types of electron beam spectroscopies, namely photon-induced near-field electron microscopy (PINEM), electron energy-loss spectroscopy (EELS), and cathodoluminescence imaging spectroscopy (CL). They have shown that - regardless of its spontaneous or stimulated nature - the electron-light-matter interaction is fully dependent on the spatial characteristics of the electromagnetic eigenmodes of a nanostructure. Moreover, the authors have found that the coupling strength between the electrons and the optical field associated with each of these modes crucially depends on the electron velocity. CL imaging probes the spontaneous coupling of an electron to the light scattered by a nanoobject. Here, the CL intensity yields a direct measure for the electron-light coupling strength and how this varies in the proximity of a material.

SPARC Spectral CL detector was used for the experiments described in the paper. The tiny gold nanostars that were used to systematically compare the processes probed by EELS, CL, and PINEM support highly confined dipolar modes at tip apexes with a radius of curvature < 3 nm.

The extreme spatial resolution provided by CL imaging in an SEM was of utmost importance for the success of the experiments. Also, the amount of CL generated upon excitation of the tiny nanotips is rather small. Therefore, the high light collection efficiency of the SPARC Spectral was crucial to obtain high-quality data with a good signal-to-noise ratio.

When talking about other applications in this field that could benefit from the cathodoluminescence technique, Matthias mentions a large interest in probing the quantum nature of free electrons. They, among others, could enable exciting applications in ultrafast spectroscopy, non-destructive biological imaging and quantum information processing.

CL is now explored as a tool to directly probe this quantum nature by looking at the modulation of angle-resolved emission patterns due to interference effects in the far field. In this context, also the interference of CL with an external reference field is investigated, where the latter can be emitted by a laser that is simultaneously used to prepare complex quantum states of the electron wave function via stimulated electron light-matter-interactions.

As for the future of CL overall, Matthias thinks is very versatile. According to him, one major direction certainly lies in expanding on the capabilities of time-resolved CL measurements to probe both the dynamics of coherent processes in plasmonic and dielectric nanostructures (as to fs time scales) and incoherent processes in semiconductor materials (ps to ms time scales). Also, combined studies of CL and photoluminescence (PL) for materials research attract growing attention. Combined spectral-, angle- and time-resolved CL could define new approaches in material analysis such as tomography of layered and buried structures. Finally, CL could become essential in fundamental research on the quantum nature of electrons as a tool to readout the electron wave function.

I believe a growing demand to come up for a system that enables simultaneous observation and characterization of CL combined with laser excitation to prepare complex electron quantum states.

And what about the next steps in Matthias’s research? He will be focusing on the implementation of a setup to probe stimulated (laser-driven) electron-light-matter interactions in the SEM. So far, this is only done in sophisticated ultra-fast transmission electron microscopes (UTEM), typically equipped with a laser-triggered photo-emission electron gun. An SEM provides a robust, cost-effective, and more accessible platform that could boost the vast opportunities that laser-assisted shaping of the electron wave front offers for imaging applications, time-resolved experiments, fundamental research on quantum phenomena, and more.

It’s official, Delmic is going to M&M 2022 in Portland, Oregon! You’ll find us at the biggest microscopy event of the year. We’ll be presenting our METEOR, ...

We are delighted to announce that Delmic - CL Solutions is a part of the Open Technology Programme, granted by NWO. The project will look into a new ...

We are excited to announce that Delmic - CL Solutions will be part of the PerFoRM (Perovskite Foils by Roll-to-roll Manufacturing) consortium, funded by NWO's ...