How to study properties of rare-earth doped materials with cathodoluminescence

Rare-earth elements, also known as REE, are a group of elements, consisting of scandium, yttrium and 15 lanthanide elements.

In the last decades there has been a significant growth in the number of devices that use rare-earth metals. They can be found in a wide range of technological areas and are commonly used in lighting and displays, CT scanners and electron microscopes, (fiber) lasers and amplifiers, anti-cancer agents, fluorescent markers, batteries, magnets and catalysists. Rare-earth elements are crucial for modern-day technology and it is important to study rare-earth doped materials at nanoscale to understand them better.

How can optical properties of REE be observed?

Lanthanides series have outer electron shells 5d and 6s, containing 3 electrons, and, most importantly, an outer shell 4f with number of electrons responsible for the optical properties. Most of the transitions that occur in lanthanides ions are called intra-4f transitions, which means that electrons, even being excited, remain their 4f shell, which is shielded by external shells 5s and 5p. Due to that, there is a limited coupling to the outside environment. This means that the transitions are similar in energy regardless of the host material.

When these materials are excited with electrons, the incoming electrons have enough energy to promote valence electrons from the valence band to the conduction band. Normally, this excitation is supposed to drop back to the valence band. However, if the material is doped with rare-earth ions, the defects inside of the bandgap are created. They draw in the excitation and the resulting emission bears the optical properties of embedded rare-earth elements. This emission then can be observed with various cathodoluminescence techniques, including intensity mapping and hyperspectral imaging.

A good example of a material which can be analyzed with cathodoluminescence is YAG:Ce3+, a yttrium aluminum garnet crystal doped with cerium which belongs to the lanthanide family of elements (Figure 1). The material acts as an efficient and robust phosphor material and is used in scintillators and LEDs. Its broad yellow/green emission band nicely complements the blue (In)GaN LED emission allowing efficient generation of white light for various applications. The intensity and color of emission can be studied with the JOLT, an entry-level CL intensity detector and other more advanced detector systems (SPARC Compact and SPARC Spectral).  The RGB CL image of YAG:Ce3+ particles below is acquired by the RGB version of JOLT, which can easily obtain information about the intensity and colour of CL emission. The emission spectrum can be studied in detail using the SPARC Spectral system. YAG:Ce3+ can be studied both in powder and single crystal form. Cathodoluminescence spectroscopy allows observing particle to particle variations, and also within particles due to high spatial resolution. 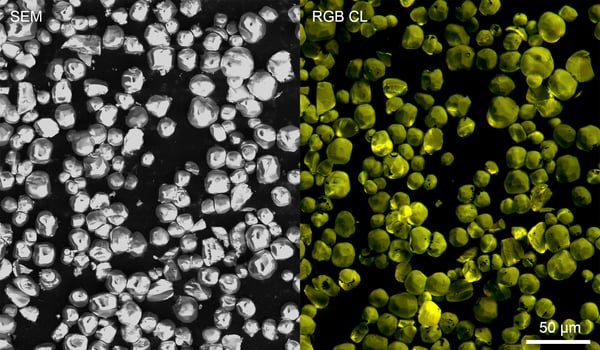 Figure 1: a SEM image of YAG:Ce3+ particles is shown together with an RGB CL image acquired by JOLT which was constructed from three RGB color-filtered CL intensity maps as measured with a PMT. Sample courtesy of Professor Xia.

Both artificial and organic materials, such as geological samples, can contain rare-earth elements that emit light. One of such natural material is zircon, which is commonly studied by geologists because it is robust, chemically inert and can persist for a long time in the earth’s crust. Additionally, zircons are rich in radioactive elements, which makes them so interesting for radiometric isotope dating. Beside those elements, zircons are often rich in lanthanides, which can be observed with CL. Cathodoluminescence imaging allows to see a rich internal structure and features associated with the growth of the crystal. Both hyperspectral and intensity mapping can be used to observe rare-earth elements in zircons. With zircon spectroscopy it is possible to map spectral distribution over large crystal and check differences between bands.

Rare-earth elements can be also used as a stable biocompatible CL emitter to study biological samples. This approach is called correlative cathodoluminescence electron microscopy (CCLEM) [1]. A study made with the use of human lung cells doped with lanthanides nanoparticles demonstrates that introduction of REE allows to observe a robust emission. Additionally, these particles can be introduced in the cell in a non-toxic concentration while the cells are alive. The emission remains stable even when the tissue is stained with osmium.

These examples show that cathodoluminescence is a fast and powerful technique for microanalysis of REE materials, which can be applied in materials science, optics, geology and life sciences. If you would like to get more details about examples mentioned in this blog post, watch our recent webinar dedicated to rare-earth doped materials:

Geochronology plays a central role in geosciences and all historical aspects of the Earth sciences. Over the years, it has become an essential scientific field ...

What are the benefits of SEM-based cathodoluminescence?

Cathodoluminescence (CL) is the process of light emission from a material as a result of excitation by electrons. Imaging CL can therefore enable us to study ...

In the past few years, cathodoluminescence (CL) has become more widely used in various fields, including geology, nanophotonics, materials science and even ...