Sample milling is a crucial step in the Cryo-ET workflow. Unfortunately, this step poses yet another occasion for ice contamination to derail efforts to obtain high-quality data. Here, we describe how ice formation affects the result of a lamella-milling process and present a solution.

Using cryogenic electron tomography (cryo-ET) researchers can obtain 3D tomograms of biomolecules at a nanometer scale in the near-native state. The resulting insights into the structure and interaction of biological molecules make it possible, for example, to understand the molecular foundation of pathogenic factors (1).

To collect the 3D tomograms in the cryo-ET, researchers use a transmission electron microscope (TEM). This technique requires that a frozen biological specimen containing the molecule(s) of interest forms a 150-300 nm thin lamella. Typically, researchers obtain the lamella through focus ion beam (FIB) milling, an approach originally adopted from material sciences. The sample milling process takes place in a cryogenic focus ion beam/scanning electron microscope (cryo-FIB/SEM) chamber. Same as with all the other steps in the cryo-ET workflow that follow sample freezing, the sample has to remain vitrified also during the lamellae milling process and be protected from ice contamination since ice growth increases the lamella thickness and decreases the TEM image contrast. For this reason, the cryo-FIB/SEM chamber operates under high pressure, reducing the number of water molecules that could deposit onto the lamellae. Despite this approach, however, there is still enough residual moisture to cause the formation of amorphous ice on the surface of the thin sample section. The typical ice growth rate under these conditions is 50 nm per hour. Since milling of a single lamella takes about 40 min, by the time several lamellae have been thinned to 150 nm, the first one will be already covered with an amorphous ice layer even thicker than the lamella itself. Not only does this ice layer decrease the contrast of the TEM images and therefore lower data quality, it also limits the downstream achievable resolution.

The common strategy to reduce the ice contamination is to first rough mill the lamellae down to around 500-800 nm, and then thin them further one by one, reducing the time between the first and the last fine polished lamellae. Yet, even with this approach, the amorphous ice growth still limits the number of lamellae that can be produced from one sample. It is a critical bottleneck when one takes into account that resolving a 3D structure of a protein complex at a high resolution requires averaging 1-2k copies of the protein complex (2).

Not surprisingly, the problem with ice contamination during the FIB/SEM milling was highlighted by many participants in our recent survey for cryo-EM users. In fact, FIB milling appeared to be the third most problematic stage in the complete lamella preparation workflow, just behind sample transfer from fluorescence light microscope to FIB/SEM and from FIB/SEM to TEM. 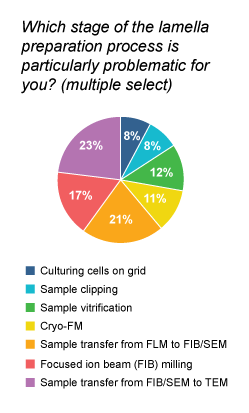 Preventing the amorphous ice formation during fine polishing of lamellae is, therefore, an important challenge in the cryo-ET workflow. If successful, it would result in a higher contrast of the TEM images acquired for a single lamella. Moreover, with more time available for milling, the throughput of lamellae production would also increase, thereby enabling the high-resolution 3D structure of the biomolecules of interest. Overall, researchers would get more high-quality data faster.

Our engineers at Delmic together with our collaborators at Max Planck Institute for Molecular Physiology in Dortmund (3) have been working on a reliable way to protect the lamellae during the fine polishing step. As a result, they designed a system we have named CERES Ice Shield. The latest version of this system consists of a cryo-shutter that protects the sample from ice contamination originating from the SEM column without the need for an independent cooling system.

How does it work? During milling, the cooled shutter is positioned between the SEM column and the sample. A 1-mm wide hole in the shutter enables an undisturbed interaction between the FIB and the sample while blocking out the influence of the SEM column. In this way, the shutter further increases the vacuum locally around the sample (4). The retraction of the shutter is easy and as soon as the electron beam is activated, it moves away automatically. The cooling of the cryo-shutter runs as long as the SEM cryo-stage. Also, since there is no external cooling system, the FIB/SEM footprint remains the same, which is important in labs with limited space. Finally, we made sure that all this is easy and fast to install, minimizing the disruption time of intensively used cryo-ET setups.

Our results show CERES Ice Shield provides an approximately 10x lower ice contamination rate. Effectively, it means that there is no limitation to the number of lamellae that a cryo-ET user can mill in one session. It is extremely useful for example for overnight automated milling procedures. It is also compatible with both plunge frozen and high-pressure frozen samples. For the latter type, the protection against amorphous ice formation is offered during the lamella thinning and polishing steps.

If you would like to learn more about this topic, check out our latest webinar joined by our Application Specialist Caspar Jonker and Dr. Sebastian Tacke from Max Planck Institute of Molecular Physiology Dortmund!

This work is supported by the European SME2 grant № 879673 - Cryo-SECOM Workflow.

With more than 90 years of development, electron microscopy is now a mature, well-established technique applied in many life science fields, such as pathology, ...