Subtomogram averaging in the cryo-ET workflow

Cryo-electron tomography (cryo-ET) allows the 3D visualization of a small volume of a vitreous biological sample with nanometer resolution. Protein complexes that reside in the tomogram can be studied in even greater detail with subtomogram averaging. Subtomogram averaging is the process of aligning multiple 3D reconstructions of identical protein complexes and averaging them. 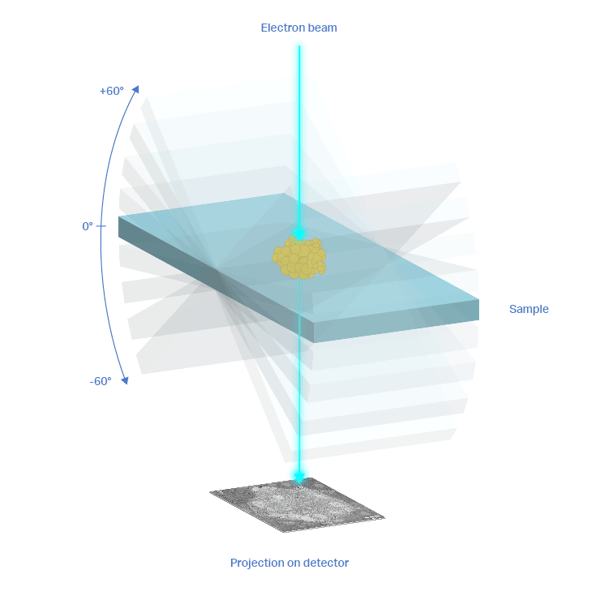 Tomograms are usually acquired from sections of about 100-300 nm thick. The section is imaged at different tilting angles, typically in the range of -60° to 60°. The resulting set of images is called a tilt series. Imaging the same area multiple times results in radiation damage to the sample due to electron exposure. For this reason, tomograms are often acquired at lower electron doses than conventional TEM. However, even with a lower electron dose, the sample is gradually damaged during imaging, leading to a loss of information at the end of the tilt series acquisition. Another consideration is that the highest resolution information is acquired when imaging at low angles, since at higher angles the relative thickness of the section increases. Taking together the increase in damage over time as well as that most information is obtained at low angles, most researchers use a so-called “dose-symmetric” approach during acquisition. In this strategy the low angles in both positive and negative tilt are imaged first in an alternating fashion, ensuring the data loss is constrained to the higher angles, leading to higher quality data [1].

After acquisition, the tomogram needs to be processed to allow subtomogram averaging. As a first step, some corrections have to be made to compensate for stage drift and beam drift that occurs during acquisition. Next, each projection needs to be properly correlated to the rest. Each image in the tilt series is a projection of the volume from a different angle. The relative angles, translations and rotations between all projections need to be exactly determined. This is done in a process called tilt series alignment. Tilt series alignment can be made easier by including fiducial markers in the sample [2], [3]. Most used fiducials are 5-10nm gold beads that assist in correlating the individual images of the tilt series. Alignment without the use of fiducials, or “markerless alignment”, is also possible and relies on features within the images [4] or on correlation between images [5]. 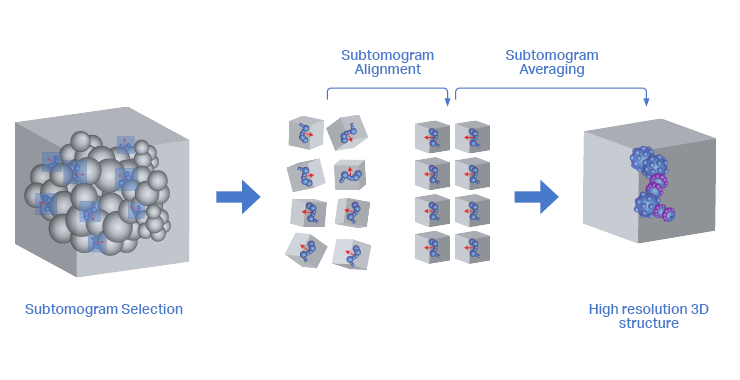 When the set of subtomograms is gathered, it needs to be aligned in a way that the 3D structures can be overlayed for averaging. This means that for each subtomogram the relative angle and translation are determined against a template. The template can be a previously determined 3D structure, or an ever-updating model of the averaged subtomograms from the current set [6], [9]. In the latter case, averaging subsets of subtomograms in an iterative way determines not only their relative orientation, but also updates the template for the next iteration. When the averaging of the distinct subsets reach the same template, the iteration stops. During this process, many subtomograms are rejected from the dataset. This can be caused by it not being the correct protein complex, but also when the protein complex is partly obscured by membranes, microtubules or protein-protein interactions. Lastly the averaging process iterates through refining steps in which parameters of the algorithm are adjusted to until the highest resolution of the final 3D model is found.

Achieving a high resolution 3D model of a protein complex in its native state using in-situ cryo-ET is a complicated procedure. The quality of the tomogram and the number of particles play a large role in obtaining a high resolution structure. So having a higher quantity of good quality lamellae is desirable.The integrated light microscopy solutions we offer at Delmic greatly increase the chance of localizing proteins of interest for lamellae milling and reduce contamination by reducing handling steps. This will lead to easier and better tomogram acquisition, and ultimately to higher resolution structure resolving using subtomogram averaging.

Sample milling is a crucial step in the Cryo-ET workflow. Unfortunately, this step poses yet another occasion for ice contamination to derail efforts to obtain ...