Preparing cryo-lamellae with the guidance of METEOR

Cryo-FIB milling is used to thin biological samples so the samples can be imaged with cryo-ET. This stage of the sample preparation benefits from an integrated FLM to image the sample during milling. One of the main advantages is that the region of interest (ROI) can be located easily based on the fluorescence signal. In our study we used yeast cells overexpressing Ede1 tagged with enhanced green fluorescence protein (eGFP). Imaging the samples before, during and after lamella milling showed that METEOR is capable of detecting the fluorescent signal at the ROI at all stages of sample thinning. Moreover, by imaging at every step, we ensured the Ede1-eGFP positive structures remained intact and were included in the cryo-lamellae.

In our study we also demonstrated that implementation of METEOR decreased the amount of transfer steps in the cryo-ET workflow. This significantly reduced contamination of the sample and simplified the overall workflow of cryo-ET sample preparation. Furthermore, the samples did not show any devitrification of the lamella, meaning that in situ imaging with FLM does not damage the sample. The integration of METEOR made it possible to easily image our ROIs in the yeast cells throughout the whole process of cryo-ET sample preparation. 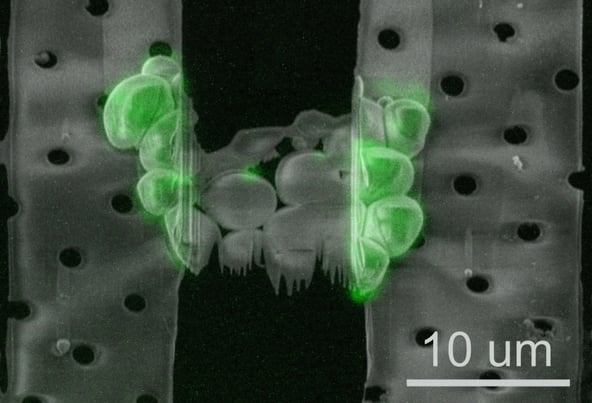 Cryo-ET is a powerful technique that can be used to acquire high-resolution 3D structures such as intracellular organelles and protein complexes in their near-native cellular environment. To make METEOR accessible to the majority of established workflows around the world, the system was designed to fit with the cryo-FIB/SEM models offered by major microscope vendors. Read the full application note below to gain more detailed information about the study on Ede1 in yeast cells and how the addition of METEOR enhances the cryo-ET workflow.

Sample milling is a crucial step in the Cryo-ET workflow. Unfortunately, this step poses yet another occasion for ice contamination to derail efforts to obtain ...